So, what's this one all about? Well I'll tell you! We have to list four truths about ourselves. The fifth "fact", we will make up, and you, the guests, have to guess which one is untrue.

So without further ado....

Hi Cd! It’s great to return to play another fun game with you and your readers! I adore s’mores, but I love sundaes more!
Here are my facts:

1. Size doesn’t matter. I’m terrified of spiders, any size, or shape. As long as I can remember... If it has eight legs I’ve been known to do desperate things. Once I undressed in mixed company simply because my sister said, “Look at ’im crawl” and pointed at my back. I go into a blind panic and like the Joe Nichols song (only without the Tequila), “Spiders Make Her Clothes Come Off”.

2. At sixteen I trained to be a pro barrel racer, then ditched on my big chance, instead, choosing to stay a summer with my mother. She was furious when she learned what I’d passed on.

3. I have a twin named Tina. She’s beautiful with black hair like our mom and blue eyes. I’ve met strangers who have called me Tina, so, though we’ve never met, I know she’s been near at times. My parents never spoke of her to me, except once when I was eighteen. That’s when I discovered her and asked Mom about her.

4. My husband had to literally drag my into the chapel when we got married 30 years ago. It was three months before I turned 21 and I had sworn never to marry before then. Less than twenty-one was too young to die.

5. I self-published my first book at ten years old when self-publishing was unheard of. It was a huge thrill to actually see kids reading my book and enjoying it. That planted the writing bug in me I think. I was in my early forties when I decided I’d be published traditionally before I turned fifty—and just five years later, at forty-eight, I did just that.

Have fun guessing which of these facts is NOT true. I even made our hostess guess. LOL I’ll give an ecopy of Risk Factors to one commenter just for guessing, right or wrong. Oh, and of course I’ll share the truth with you later. Thanks for having me back, Cd! What fun this is. :-)

#1 I laughed! Not for your arachnophobia, because sister, I'm with you on that one. Especially when I lived in Australia where 4 of the most venomous spiders inhabit. But I got a great visual of you stripping down in a whirlwind of clothes and screaming!
#2 Aw, am envious that you are so talented as to do barrel racing as I'm a horsie myself. But it made my heart melt just a wee bit to know you did it to spend time with your mum.
#3 Another heartbreaker! How did you discover your twin? What a great story. Tell us more! Unlike every other girl in this world, I never wanted a twin. In fact, I told my mum she could stop having kids after me, and ended up with four sisters.
#4 LMAO
#5 Very impressive Miss Calisa, another author meant to be!

Find Calisa on her cyber ranch http://calisarhose.com or on Google +Calisa Rhose
Find Risk Factors (her second book) at fine ebook distributors as it’s re-released to them in the next few weeks. You can get it now at one of these:
Kobo
iTunes
Amazon
Kensington-Lyrical Press 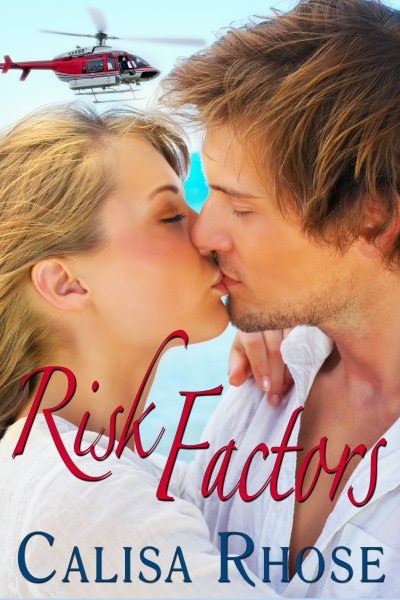