Without further ado, I am most pleased to introduce the lovely and talented (and very brave!) Elise Cyr!


Sundae with the Nut Elise Cyr

1.Favorite knickers: cotton, lace, silk or errr…leather?
Cotton undies are usually my go-to, but when I want to feel pretty, pretty sexy, or both, lace does the trick.

2.Who is your fantasy male or female? Or both?
Just one? Jason Statham, Viggo Mortensen, Robert Downey Jr., and though I normally don’t go for blonds, I could watch Jude Law brush his teeth all day.

3.What language, when heard spoken, makes you frisky? (like Jamie Lee Curtis in A Fish called Wanda)
A British accent does the trick every time (see Statham and Law above).

4.What vehicle, abode, beach, construction site or other locale did you lose your virginity.
A bed and breakfast in the mountains. While I did eventually marry the man in question, let’s just say our romantic hike the next day was not the best decision.

5.Do you believe in love at first sight?
Yes. If it happened to me, it can happen to anyone. It’s staying in love that’s the tricky part.

6.If you become a best-selling author and sell your movie rights, what will be the first thing you do when you hear? Other than contact Cd Brennan and offer to share with her, of course.
I think I’ll probably stare dumbly into the screen of my phone or computer for a good long while, then tell my husband he’s taking me out to a fancy dinner—the kind with linen napkins, a sommelier, and a dress code.

7.Who was your first crush?
I watched a lot of TV and movies growing up, so I would have to say Sean Connery from early James Bond films and Tom Selleck from Magnum, PI. Both are meh to me now, but at the time I was a bit of a fan girl.

8.I wanted to be a helicopter pilot and a cowgirl when I grew up (still do). What did you want to grow up to be when you were a little girl?
This is going to sound lame, but I’ve always wanted to be a writer. The library was my favorite place to go growing up, and while it has taken time for me to actually admit to my dream and improve my craft, I wouldn’t have it any other way.

9.Most romantic or sexiest destination out there.
I’ve never had a honeymoon, so I can’t speak to Hawaii or the Caribbean. But this past summer, my husband and I went to Ibiza, Spain. It’s this island in the Mediterranean, with beautiful beaches, all the tapas and cava you can ask for, and an ancient walled city that overlooks the sea. We had a fantastic time.

And last but not least.


* * * *
Miss Elise, you are one of the true romantics having lost your V to the man you married. And how swoony! A B&B out in the mountains. It must have been planned, thought out, designed in some way by your hubby to make it as memorable as possible. Sigh. That's lovely. You weren't sore the next day, were you? LOL but I loved that you went out hiking. Nothing like a bit of fresh air to make you frisky again.

And boyo, never apologize for aspiring to be a writer. Because that shows that you followed your dream. I still wonder about missing out on mine, even at 42 years old, two kids, one dog, and one husband who isn't around much. I used to have a huge adventurous spirit and that's all been sucked out of me these days. But I love my boys, so I won't complain too much.

And hey! I never had a honeymoon either. Where would you go now, Miss Elise, if you could do over? Where would I go??? Somewhere beautiful and romantic but not with too much to do or I would feel guilty for spending time with my hubby in a sudsy tub with candles. And dammit, HE would learn the art of massage! (He just pinches now LOL)


Elise Cyr’s medieval romance Siege of the Heart is now available. You can follow her on Twitter, Pinterest, Goodreads, or check out her blog. or on Google +Elise Cyr

I LOVE LOVE medieval romances, and Siege of the Heart is on top of my TBR list! 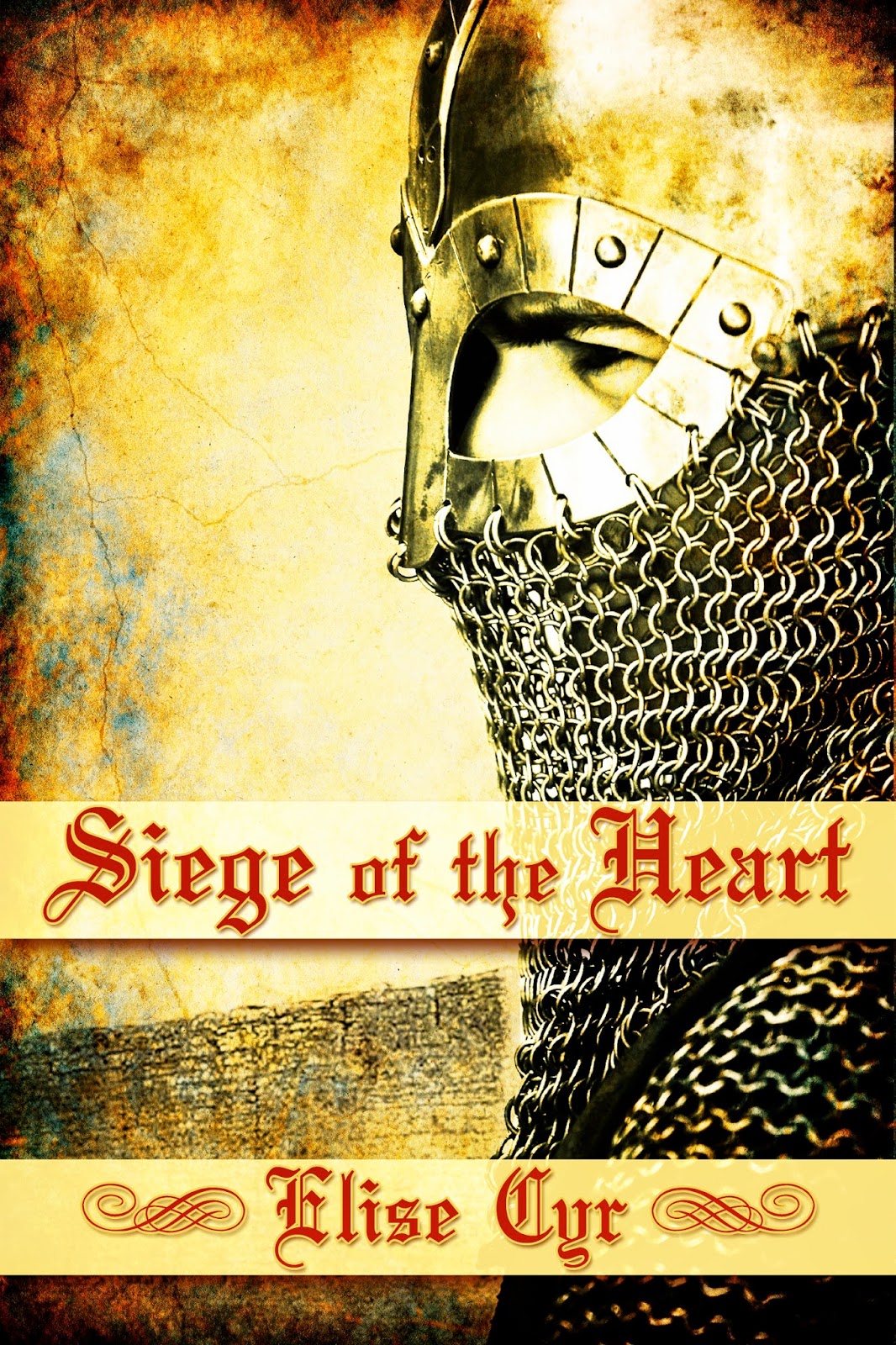